Things are starting to settle down after the Galway Film Fleadh, what an amazing experience that was!

The Fleadh is an absolute master-class in the execution of a festival which is inclusive, open, friendly, and downright amazing! We have just had one the best weeks of our lives there and it’s all down to the people who run the Fleadh, the people who work at the Fleadh, and the people who volunteer at the Fleadh! Galway should be so proud of this week long nugget of absolute joy. We were delighted to have the Little Cinema Galway involved with it in a small way. 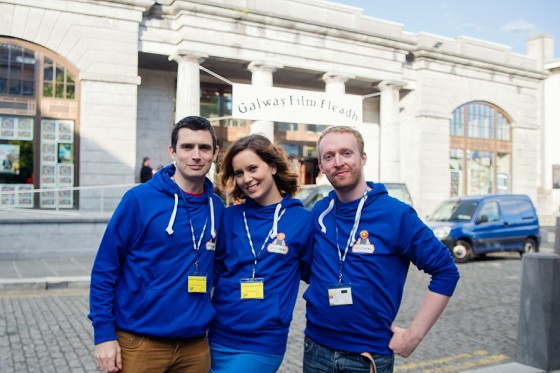 We were filming every day, collecting people’s favourite Film Fleadh Memories over the years. There was a beautiful mix of funny, quirky, emotional and educational stories all around. We are going to screen the final video it at the Little Cinema Festival in September (details to be announced soon) and it will also be added to the Fleadh archives for later years!

Here is a little teaser for now, with Festival Programmer Gar O’Brien giving his favourite memory:

To our delight, we also had a screening at the Cinemobile on Thursday 10th that featured a selection of short films that represented the flavour of Little Cinema. It was a showcase followed by a debate that focused on grass root film-making in Galway. If you didn’t get a chance to catch the films we screened, you can see them here now:

Stephen Cadwell – It Came from Dublin

We would like to thank everyone who bought tickets and made it a sell out show as well as film makers who took to the mike and said some wonderful things! You guys are the heart and soul of the Little Cinema, stay awesome.

We can’t write this post and not commend the Fleadh TV crew. Every single one of the team is super sound and very talented. It was the first year ever of Fleadh Youtube, so they were starting with a blank canvas, but set the bar incredibly high! The guys were working crazy hours with great energy, professional camera work and top notch edits – they even made our waffling look good! Check out the highlights of Day 4, where Little Cinema is featured:

To sum up: we met some beautiful people, collected some moving and hilarious sound bites, ate great food, but most of all – got inspired and invigorated. Every now and then you need a shining example of just how creative, proactive and helpful people can be in order to get new ideas and keep the old ones exciting. Thank you to everyone who made us feel so welcome and who made the week so special. We feel a void now that it is over but I can’t wait until next year!

Below are just a few photos we managed to sneak during our screening and the duration of the festival.