Very excited about the upcoming Little Cinema on Tuesday!
With it being the first screening in the school year we are hoping we’ll see some new film-maker blood there from the colleges as well as some familiar faces!
The doors are 9pm as is tradition and the entry remains a pocket-friendly €3. All the magic is going to take place Upstairs in Kelly’s Bar on Bridge Street.

We have a great mix of films and it should be a really good night. The line-up is as follows:

We hope to see you there!
LC 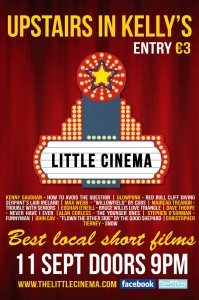