We were delighted to see such a huge crowd for January’s Little Cinema, massive thanks to everyone who braved the nasty weather to help us make the night a great start to a new year of short film in Galway. It was particularly lovely to see a lot of new names on the list of submitters! We’re always happy to see new faces joining the Little Cinema community. 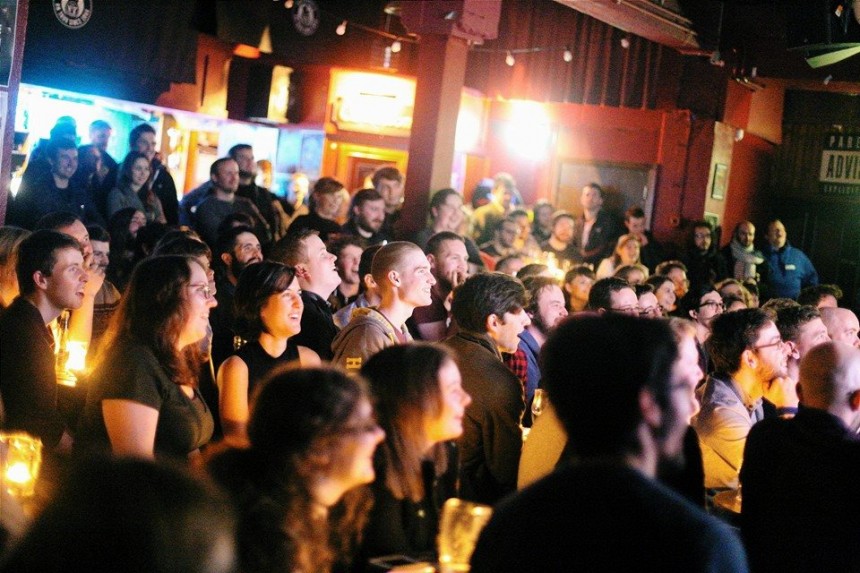 If you weren’t able to make it, or simply fancy revisiting the brilliant short films we’ve screened on the night, have a look at our recap below. If you’ve enjoyed a certain film, make sure to show your support by liking and sharing the film-makers’ work!

Our first film of the night was a Little Cinema production made to commemorate Michael D. Higgins’ visit to Galway for the first anniversary of Galway being named a UNESCO City of Film.

Our second film of the night, submitted by Luca Melis and titled Silhouettes, was a beautiful observational documentary contrasting light and dark as night descends in a cemetery.

Next up was a comedy sketch from Graham Patterson, who described it as “A film called Drugs… about drugs” which summed it up pretty well! The sketch got big laughs on the night for its off the wall humour, and is well worth a rewatch if you fancy a giggle!

Next was a film called Callum, from a series called Tome, which focuses on various characters from Galway. The film allows us into the mind of a young man frustrated by his life and the people around him.

Just before the break was a short sketch from Ian Donoghue called The Tea. Never before has boiling a kettle seemed so epic or hilarious! Ian’s film was a great end to the first half and had the crowd in stitches!

First after the break was a film from Little Cinema regular Chris Tierney. Compiled from footage Chris as shot over the last few years, this compilation was up to Chris’ high standard – beautiful , creative camera work edited to perfection.

Following Chris was Conor Ostheimer with his film Hand Rush, a fast paced short film book-ended by ominous shots of a gravestone, with nice editing and a great soundtrack.

Next up was Karma, submitted by Brian O’Regan, which told the tale of a man going through hard times who may just have finally come across a bit of good luck.

Our penultimate film of the night was Railway, submitted by Finian Robbins. Great writing, performed by two fantastic actors, in a gorgeously shot and edited short film. Finian Robbins is definitely one to watch!

Closing out the night was a music video directed by Lakshika Serasinhe for Tracy Bruen and Band’s song Make Mama Proud. This is a great example of how to make a music video – the visuals suit the music perfectly complementing a great song from one of Galway’s great musicians.

So ended another great night of short film at Little Cinema, huge thanks to all our submitters and to everyone who came along to support! We’ll see you all again at the end of the month, have a great February!